Did U Know What is ASCII (American Standard Code for Information Interchange)? 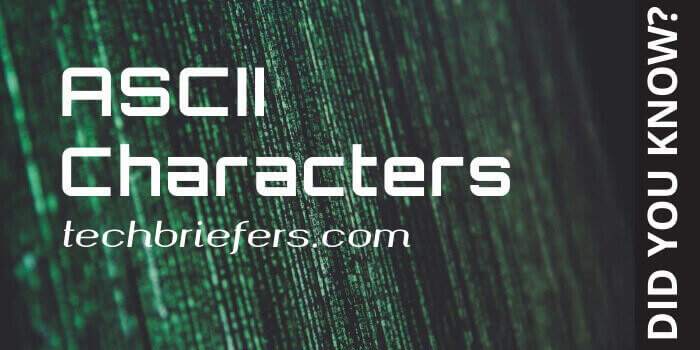 Today I have chosen a very basic topic to explain – what is the ASCII code?

WHAT IS FULL FORM OF ASCII?

The full name of ASCII is “American Standard Code for Information Interchange”. It developed by the “American National Standards Institute” (ANSI).

American Standard Code for Information Interchange is the most general format for text files in computers and on the Internet. In ASCII files, each alphabetic, numeric, or special character is represented with a 7-bit binary number (a string of seven 0s or 1s). 128 possible characters are defined.

So, the American Standard Code for Information Interchange uses 7-bit binary code to represent text in the computer. Whatever we write on the computer today, it is written in ASCII. The ASCII code represents the representation of computers in other computers using text, communication equipment, and text. The most common text file format used on a computer is.

Each computer user can operate the computer by creating code, based on the binary system for digits and letters and symbols. However, its code will only apply to the programs and commands given by that user. it does not allow other computer users to exchange mutual information unless they are familiar with the code signals used by each other.

In order to facilitate the exchange of information, a standard code has been prepared in the United States of America, which is now recognized worldwide, it is known as ASCII.

For example – ‘A’ has code value 65. In it, each digit (letter) and symbol is represented by 8 bits. in these 8 places, only 0 and 1 numbers are written. This computer contains a character encoding scheme. Text files stored in this code format is called ASCII files.

See the list below which shows ASCII Value for any Character –

WHAT ARE BIT AND BYTE?

One bit (binary digit) is the smallest unit of data in the computer. It is a binary value, either a big difference between 0 or 1. and a byte, 1 byte is very big with 1 bit – eight times bigger. in fact, there are eight bits in each byte. Every letter, number or special mark pressed with the keyboard in the computer’s memory is stored in ASCII code. In this code system, each code is of 8 bytes. thus, to conserve any letter in memory, 8 bits consist of 1 byte.

In addition to numbers, this is a sign that is used to describe language and meaning. For example, we see

ASCII contains 256 codes, the value of the standard ASCII code is 0 to 127, while from 128 to 256, the Character Extended ASCII characters are set. Computer systems generally use the American Standard Code for Information Interchange code to store characters. Each letter is stored using 8 bits.