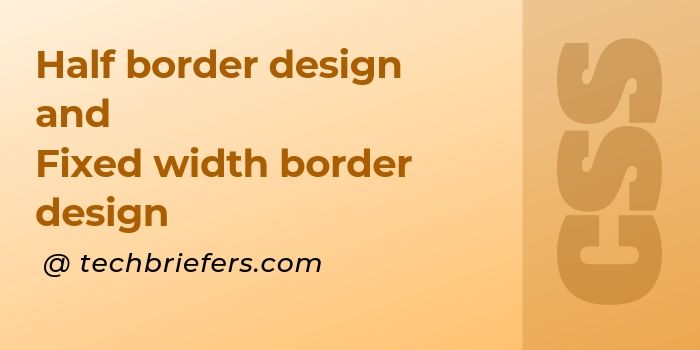 In CSS we can put borders to either side of an element but what about making a half border design or the border for content only i.e, text border design. In this article, I hope i can solve this query of novice designers in very simple and easy way. So let’s get started.

In the first section I am going to tell the design will will have a border under a heading and the text only will have bold border. This layout is frequently used and seen in WordPress. I too have done this with my heading by customizing my layout.

How to create a border designing only for text in CSS.

Above is the heading block for which we are going to design a border that will be of the same width as the text is. The css for this is:

Here i am creating a border for a span inside heading tag. Span is an inline block which contains the width of content. Heading is a block element that acquires with of whole container(100% of container by default).

Here, h1 tag with class my-heading have a border of 1px in grey color which is a full width border. Inside it there is a span element which has border of 5px in red like color (#ef3e47) which is of same width as of text present.

Above is the heading block with class my-heading-two. I am designing a fixed width border of 5px for this heading element of (in this case 250px). The css for this is below.

Though, the styling is simple but I think it should be more in a managed way to produce a nice result. So, below I am providing a full code for both the deigns usable in a full web page.