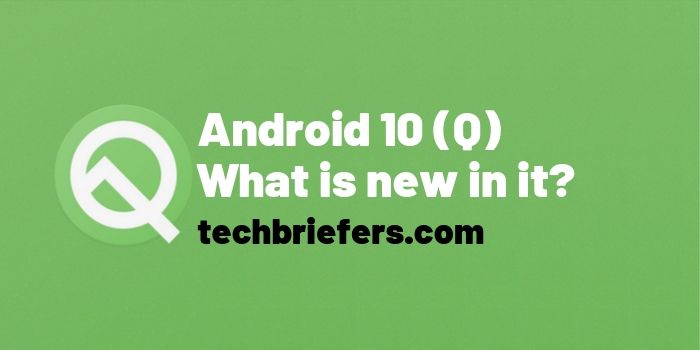 Do you know about Google’s new Mobile Operating System Android 10? Google has released Android 10.0 beta version a few days ago, named it Android Q. Many new and exciting features have been added to it. Can you install this OS in Android Phone? In this post, we are sharing the complete information about Android Q operating system in Hindi. What is Android 10 (Android Q), what is New and How to install it?

Google has finally announced the launch of Android Q Beta or Android 10.0 Quindim. A lot of new things have come to this OS. This OS will soon be launched for all smartphones.

In this article, I will tell you what is Android Q and what are the new features in it?

What is Android Q?

Google has recently launched Android Q, which is now available for download at google.com/android/beta.

The Vice President of Google posted on his blog that app developers have been informed about the main features of this operating system. This mobile operating system has more focus on privacy and security.

Here let me tell you about some previous generation of Android.

Android Q is the latest and next version operating system among them all.

What are the new features of Android 10 (Android Q)?

Google has added many new features to its new Mobile Operating System Android Q or Android 10. Features of Android Q

Let’s know about are the new features in Android Q operating system.

Google has focused most on privacy in this new operating system Android Q. In this, users will be able to decide which apps to give permission to which data.

In all the mobile operating systems launched until now, you were able to control only the permission of the location. Now you will have control over all the apps.

You have heard about the foldable screen mobile phone. Google has also designed this new Android Q operating system for foldable smartphones from Samsung and Huawei JC smartphone maker companies.

Through this new operating system, users will be able to easily share data in any other device. For this, users will get features like sharing shortcuts. Apart from this, services like Camera, Connectivity, Gaming, and Neural Network API will also be available.

Users will be given more control when apps get the location. With this, the app will work only when it is running or in the background all the time. User can allow viewing apps location anytime.

With the help of this system white screen recorder tool feature of Android Q, the user can also record the screen content of their mobile. With this process, he can also record his voice over and share it.

In the operating system till now, you must have seen the option to upgrade the application only. But now you can also downgrade apps to Android Q.

This new operating system will also include a new Emergency Button. This can be accessed from Power Menu. Through this, the user will be able to make emergency calls in a short time.

The advanced version of Notification Management Mechanism may come in Android Q operating system. The feature of Manage Notification can come in place of Manage.

Nowadays Dark Mode is coming in all Apps. Dark mode feature will be available in Power Safe Mode in Android Q operating system.

Users can get PiP Mode in Android Q. Just as in Samsung phones, many apps can be run simultaneously on a small screen, in the same way, other phones can also be run.

We still do not have complete control over our phones. In Android Q operating system, Google can give more permission to users and users will be able to access more than ever.

Android Q Operating System Mobile Answer If you remove the screenshot, then your notch will also come in it. By the way what was needed but it has support in Android’s new operating system.

Android Q will have Natively Support. In fact, you will be able to control the Depth that occurs in Android Q. This is a very good feature.

Android Q is coming to desktop mode. It is also being talked about, not much has been said about it. Therefore, it did not say much about it.

This will give more control over access to Shard Files. Users will be able to control the app’s access to photo, video and audio collections through new runtime permissions.

For which smartphones is Android 10 (Q) available?

Google’s new Android Q operating system has been rolled out for users. Currently, it has been introduced in the Beta version. It is also available for limited devices.

Users who do not have Google’s smartphone can download this image through Android Emulator. But before updating it, do take Data Backup.

Google says that the latest version of Android Q or Android 10.0 will be made available on all mobile devices by August 2019.

How to Install Android Q in Your Smartphone?

Right now you can install Android Q Beta version only in Pixel smartphone. For this follow the following steps.

If you want to go back to your Old Version operating system then you can go to the Android Beta website and click on Opt-out option.

As you will have an update in the next 24 hours. After this update, you can reset your smartphone. After resetting, the old version will come on your mobile.

For more information on installing Android 10 in your phone, read these posts,

How to install Android 10 in your smartphone?

What is the name given to Android 10?

Google has not given any official name to its Android Q Operating System yet. But it may be announced soon.

If you are thinking that after which dessert will Google name Android Q Update? So we have some suggestions for this which we are telling you here.

Google may name this update one of the following.

It is difficult to say anything about it, but the name of Google’s new operating system can be Quindim.

Hope you will like this information, so now if you use Google’s Pixel smartphone, then try Android Q and try and enjoy it.