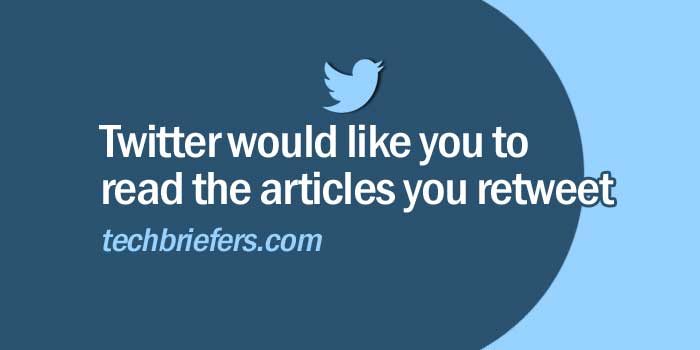 As a continuation of its fight against disinformation on its social network, Twitter is launching a new feature to encourage you to consult press articles before retweeting them.

There is definitely movement on the side of the bluebird. Twitter has launched a series of measures to limit the spread of spurious information on its network. This desire was first materialized in the form of a “misleading media” label, which is now affixed to various publications relaying fake news, deep fakes and other content whose original meaning has been changed. Recently, the firm co-founded by Jack Dorsey applied this mention to several tweets shared by the American president and relaying false information, before going so far as to report a new burst of tweets a few days later for “apology for violence”, when Donald Trump reacted violently to the Minneapolis riots.

Twitter is continuing its hunt for fake news and its spread by launching a new feature, which should encourage Internet users to read the content they share. Concretely, the platform will display a prevention message when a user prepares to retweet a press article without even having consulted it. “Sharing an article can spark a conversation, and you might want to read it before tweeting it. To promote informed discussions, we are testing a new type of incentive on Android – when you retweet an article that you have not opened on Twitter, we may ask you if you would like to open it before “ said the social network on the Twitter Support account at the launch of this function.

This tweet was also retweeted by Jack Dorsey in person, before being commented on by Elon Musk, who declared that he completely agreed with this decision: “Good idea. Many articles are retweeted in relation to titles that do not correspond to the content, ” expressed the boss of Tesla and SpaceX.